First things first. The iPhone 7, if initial market reports are to be believed, is well on its way to becoming a superhit. Announced on 7 September, preorders for the phone began a couple of days later and continued till the official launch on 16 September. Apple, the California-headquartered digital electronics major, releases the best iPhone every year, only to better itself the next year. Like in the past, the iPhone iOS features were already leaked over the internet, much before the gadget was officially launched. So we stayed clear of what has been already said, and decided to bring you the top hidden iPhone 7 features.

The iPhone 7 runs on iOS 10 and here are the hidden features that you were eagerly hunting for.

10. Turn that camera to a magnifying glass 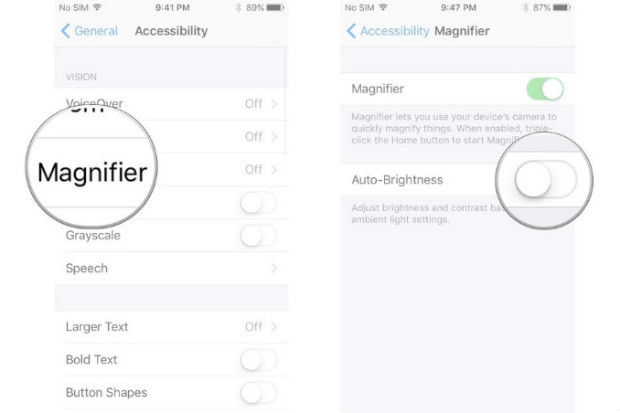 The Magnifier of iPhone 7

Well, we all have had that moment when we tried to zoom in on a subject with our iPhone camera so that it can be used as a magnifying glass.  But thanks to the best iOS 10 features, it’s now an official thing. With a quick change in the settings, you can view some really big images. Tap thrice on the iPhone 7 Home button and you can open the camera automatically with adjustable magnification. Now follow Settings>General>Accessibility>Magnifier. And finally, turn on the Toggle option here.

9. Transcribe all your voicemails 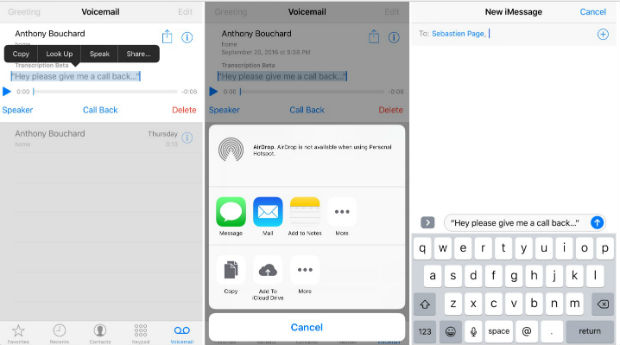 The new iOS can transcribed the voicemail

We were a bit skeptic when we first discovered this function among the iPhone hidden features. We all know how Google Voice works and wondered where this feature will be a worthy match. But we were left pleasantly surprised. From now one, whenever someone leaves you a voicemail, iOS would only take some minutes to transcribe it. And when that’s complete, tap on the voicemail for expanding it, you’ll get to view the transcription. Voice recognition software are today much advanced than their earlier avatars. But hold on! This feature may not work for all because it depends on your mobile operator. 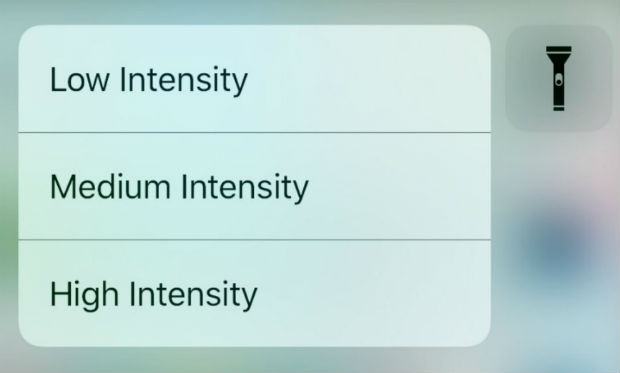 No, Apple didn’t dress the iOS 10 with a Star Wars theme. It has simply allowed you to change the flashlight intensity. And to do this, you have to use force; the Force Touch, that is. This helpful little feature allows the phone to react according to the pressure applied on it.  This is not exactly among the hidden things in iPhone 7, as it was tested in the earlier version. But this time, it’s not only about the flashlight. You can tap to select the low, medium and bright intensity beams.

7. Swipe left on lock screen to access the camera

Apple has changed the way you unlock your iPhone. And it’s also among the best iPhone 7 features. You now simply have to click on the Home button and wake up the device so as to bring up the Touch ID option or the passlock of your lock screen. On the iOS 10, access to the camera from the lock screen no longer involves a mere swipe up. It now displays the control centre options instead. You may still access the camera by quickly swiping to the left.

6. And swipe right for widgets 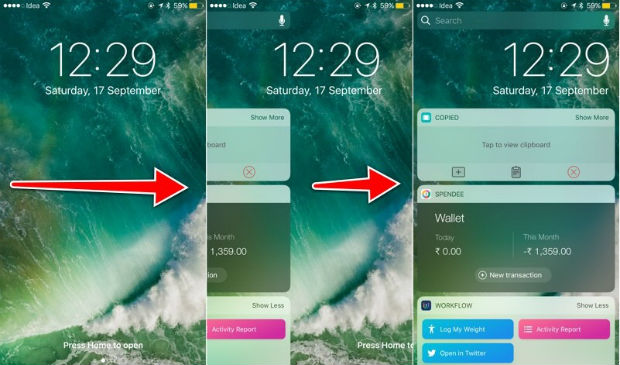 While swiping left on the lock screen display brings up the iPhone 7 camera, swiping right allows you to access the widgets. The widgets can also be customized by tapping on the Edit button, located at the bottom of your screen. Navigate and find the widgets you want to add to the Home or lock screen. Now tap on the green “+” icon beside each widget that you want to add. Click on Done once you have finished adding all the widgets. 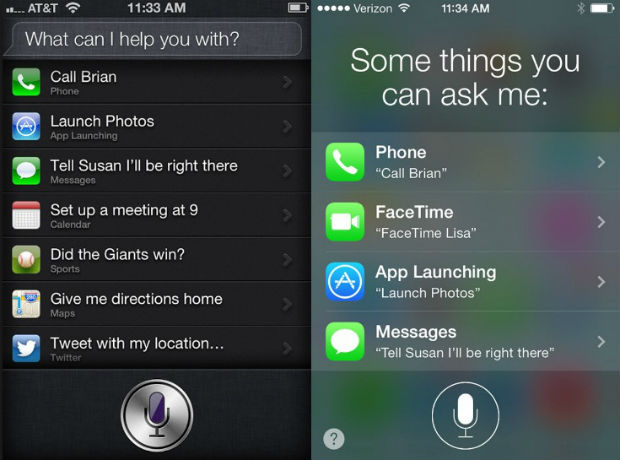 Siri will read the caller’s name in iPhone 7

One of the key differences between iOS and Android and among the best hidden iPhone 7 features. Siri, the intelligent personal assistant, can now announce the name of the person calling you. All this while, whether jogging in the park, driving in chaotic traffic, wearing headphones, or simply strolling on your terrace, you had to stop and look at your iPhone screen to know who’s calling. But all that’s history now. Siri can blurt out the name of the caller and do more. You can customize Siri and make her announce the caller’s name only when you are connected to the car Bluetooth or have headphones.

4. Say no to bloatware 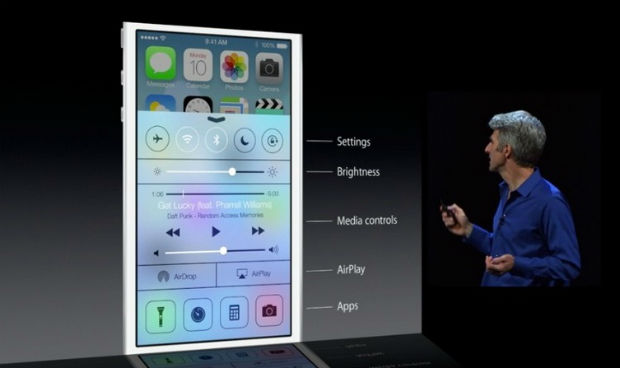 Easy to remove Bloatware in iPhone 7

The new iPhone allows you to disable or uninstall some of the preloaded apps that you don’t want. That may also include the best iOS games installed on the phone. The process is just like removing any other app. Long press on the app icon until the “x” appears. The feature is helpful if you don’t use apps that are of any use or if they impede your phone’s performance. Be careful not to delete system apps because they are important for optimal performance of your phone. But if apps like Stocks or Newsstand doesn’t interest you, get rid of them. 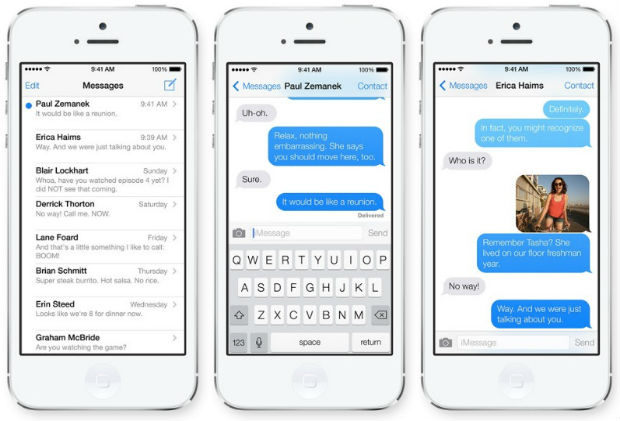 The All New iMessage in iPhone 7

There have been some major changes to iMessage in iOS 10, understandably to sway people away from WhatsApp. The iMessage is now equipped with new drawing tools and animation effects. But perhaps the most interesting of all hidden iPhone 7 features, and probably the one not too many people know is the access to bubble effects by long pressing the send button.  Then there’s the Tapback function as well. Double tap on a message and you can react to it with an emoji, like a thumbs up sign. Let your friends know you’ve read their messages sans a full-blown notification. 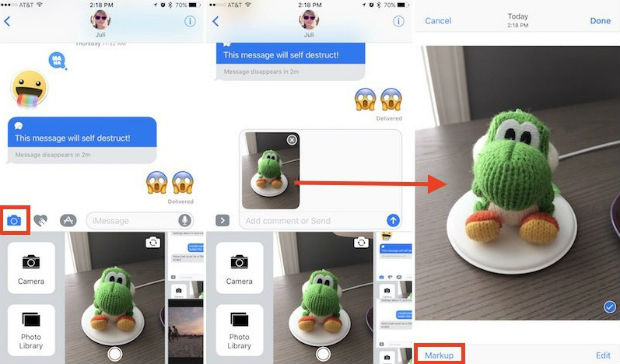 Photo Markup is so easy in iPhone 7

Apple has updated both the Photos app and iMessage with a new tool which allows you to markup the photos. Select a photo for sending via iMessage. Now tap to preview it and tick on the Markup option at the lower left corner. You can now write, draw, and color the photo ahead of sharing it. Don’t expect any Photoshop effect. But it still gets the job done. Likewise, while viewing a picture in Photos, tap the Edit icon, then click on Extension, and select Markup. This one is also one of the coolest and lesser known hidden iOS features.

1. Remember where you parked 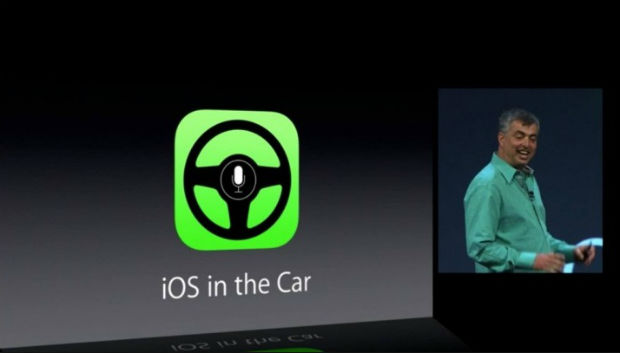 All of us have faced this problem. We forgot where we parked our car. But trust Apple to come up with some hidden iPhone 7 features. Apple Maps on iOS 10 now makes that a thing of the past. It remembers where you parked your car. No worries as long as your iPhone is locked to Apple CarPlay or the car’s Bluetooth, and there’s a GPS signal around. It’ll send a notification to the phone if you go cool on the heels of your vehicle. Certainly among the top iPhone 7 features. Simply enable the feature under Settings->Maps.

That makes our list of some really cool hidden iPhone 7 features. Those of you who have managed to lay your hands on the gadget may have already unearthed some of these. But there’s a lot more to be discovered. The iPhone 7 is yet to be released in many major markets across the world. But that hasn’t deterred the gadget’s enthusiasts to hunt for iPhone 7 hidden features. Let us know in the comments box below whether you have discovered some more hidden iPhone 7 features other than the ones mentioned here. We’ll love to hear from you.