A few years ago, blogging was a viable source of income. Some of the more popular blogs even sold for millions. But now video blogging has taken over and as such YouTube is the habitat of all the video bloggers. YouTubers earn mainly from video advertisements, brand sponsorships, product placements and collaborations. Some of the popular YouTubers are not only rich but also really influential their genre. Here are the Top 10 Richest YouTubers. 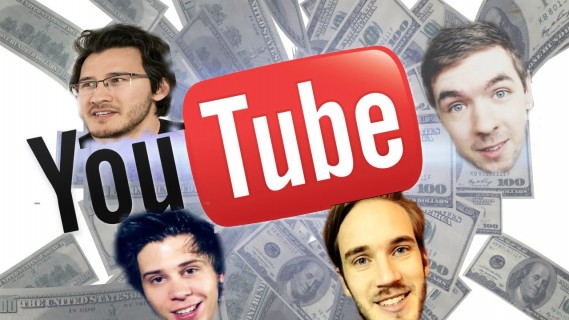 At number 10 in Richest Youtubers is Rosanna Pansino. Rosanna is the culinary expert of YouTube who uploads everything from Do It yourselves, how-to’s and video tutorials. Despite being a self taught cook she has gained lot of fame and even launched her own cookbook called “The Nerdy Nummies Cookbook: Sweet Treats for the Geeks in All of Us”. She first got inspiration about cooking from her grandmother and she started her video by sharing her grandma’s recipes, tips and tricks. She has over 6.1 million subscribers on YouTube and has earned US $2.5 million last year.

At number 9 in Richest Youtubers is Roman Atwood. He is probably the most popular pranksters on YouTube whose pranks have taken him to dizzying heights. He directed and starred in a prank movie called “Naturally born Pranksters” which was released on April fool’s Day. He had collaborated with many other famous pranksters like Denis Roady and VitalyzdTV. His videos also feature his family members. His video in collaboration with Nissan earned him the Streamy Awards. He earned US $2.5 million last year.

At number 8 in Richest Youtubers is Lily Singh. Lily Singh is hands down the most innovative and funny person you can find on YouTube. Her claim to fame were here wacky ethnicity based parody videos which while being fun never crossed the boundary of being offensive. She even went on a global tour ( A trip to Unicorn Island) and later released a documentary on it. She has been recipient of many awards like MTV 2014 Fandom Award “Social Superstar of the Year” and 2015 Streamy Award “Best First Person”. She has earned US $2.5 million last year.

At number 7 in Richest YouTubers is Michelle Phan. Michelle is the resident beauty specialist of YouTube. She is the frontrunner in fashion and beauty content on YouTube and even her channel reveals beautiful aesthetics. No wonder she has more than 8.5 million subscribers and her total view count of all videos is over 1.2 billion! Apart from her video blogging, she also manages her makeup line (“em”) and her beauty subscription service called Ipsy. She earned US $3 million last year.

At number 6 in Richest YouTubers is Olajide Olatunji aka KSI. KSI is a rage on YouTube and that is mainly because of the great variety in his videos. While most YouTubers target a specific crowd, KSI makes videos for all. From Gaming, Gaming Commentary to music videos and prank videos. His successful YouTube career has propelled him into the world of music with him churning many singles that were on the UK music charts. He has earned US $4.5 million last year.

At number 5 is Rhett and Link. This funny duo is among the most popular artists on YouTube with more than 4.1 million subscribers. They are the whole package, making funny local commercials, parody music videos, comedy sketches and also a talk show called Good Mythical Morning. They call themselves “Internetainers” and are responsible for many viral videos over the years. They have earned US $4.5 million last year.

At number 4 in Richest YouTubers is Lindsey Sterling. She might as well the richest YouTuber musician out there. She first got into public attention due to her violin skills and dancing. As her popularity grew on YouTube, the world started taking notice of her with Forbes even naming her in “Top 30 Musicians under 30”. She was also quarterfinalist at America’s Got Talent and her debut album Shatter Me was also on the Billboards charts. She has earned US $6 million last year.

At number 3 in Richest YouTubers is The Fine Brothers. The Fine Brother is a duo of Benny and Rafi who make comedy sketches and prank videos. But their trademark videos have become the React videos.  They make videos about teenagers, kids, Elders and YouTubers react to various other videos or news. They made react videos so popular that now many YouTubers have joined the bandwagon. With 13.9 million subscribers and earnings of US $8.5 million, they are the biggest in the business.

At number 2 is SMOSH. SMOSH is a comedy duo comprising of Anthony Pidillia and Ian Hecox. SMOSH have been one of the most popular faces among the teenage audience and are among the first YouTubers to have their own wax statue at Madame Tussaud’s. Famous for their parody videos and comedy sketches, they have over 22 million subscribers till date. They even had movie made on them. They earned US $8.5 million in 2015.

At number 1 in Richest YouTubers is Felix Kjellberg aka PEWDIEPIE. When it comes to the stats, PEWDIEPIE is the undisputed kings of all YouTubers. He is famous mostly for his let’s play videos and is a prominent gamer. He is also the face of YouTube, appearing on billboards and he even was a guest at Late Night show with Stephen Colbert. With 44 million subscribers, PEWDIEPIE has earned US $12 million last year.

YouTube was started as a basic video sharing platform has evolved into a lucrative platform for business. Now even YouTube has made normal people with passion for a certain field millionaires but just talking about it. Also business are looking With the release of YouTube Red, the potential of YouTube is further being tapped. These YouTubers in this list are not only among the most popular in the world but are also the richest in the world with more than multi-million US dollars annual earnings.