Sports have been a part of human culture since almost as early as 2000 BC, and after the creation of the Olympic Games by the Greeks, it has become a kind of a worldwide war that is peaceful ! Gradually, numerous sports movies have been made, both fictional and ones based on real sports events. The thing about these movies is that even if we’re not directly related or even acquainted to that kind of sport, the surprising sense of motivation that pulses through our veins during the climax of these films is something that is refreshing as well as thoroughly inviting. I mean, anything that motivates us enough to get ourselves off the couch even for ten push-ups is worth it really! So here are the Top 10 Best Sports Movies Ever Made! 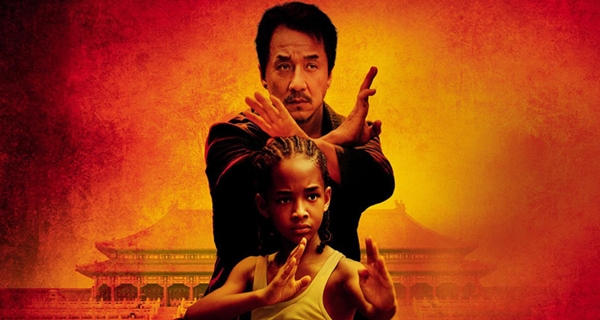 Featuring the legendary Jackie Chan and young Jaden Smith, The Karate Kid occupies the tenth position on the list of the Top 10 Best Sports movies ever made. Dre Parkar, played by Smith, is a twelve year old American who moves to China with his mom, and quite unwillingly so. Dre is bullied by the Cheng, his classmate and a kung-fu prodigy, who attacks him. The next scene shows Dre’s maintenance man, Mr. Han, coming to his rescue, who is also a karate master (hello China). Following is the beautiful story of how Dre learns kung-fu after somehow convincing Mr. Han to teach him, and how at the end both Dre and Mr. Han get the respect that they deserve as people and as student and master of kung-fu.

This film is based on the sports known as Mixed Martial Arts ( for all purposes of those who haven’t heard of it, it’s basically a kind of boxing ) which was released in 2008. With a somewhat similar plotline as that of The Karate Kid, Never Back Down is number 9 on the list of the Top 10 Best Sports Movies Ever Made because of brilliant acting and enjoyable dialogues by the teenagers on whom the movie is based. Protagonist Jake Tyler, played by Sean Faris, mistakes MMA for streetfighting but soon learns that there is much more to it than that. He convinces the legendary MMA trainer Roqua to be his coach and masters the art after immense training. Tyler uses MMA to control his anger issues and despite many setbacks throughout the way, he “never backs down”.

We’ve been through with Karate and Martial arts, and next in line is the blood-sweat-tear  game of boxing. But Real Steel is not just any plain old boxing movie, because the boxing here is between robots! The year 2020 sees the replacement of human boxers with robots, so maximum fun and no casualties.  Former (human) boxer, Charlie Kenton (Hugh Jackman) gets in trouble due to some money issues after he loses his robot in a fight. He later learns that he is to look after his son, Max after the death of his ex girlfriend. The story proceeds with Max finding a broken-down robot called Atom in a junkyard, and learns that Atom has a unique ability of copying its owner’s moves by a shadow technique.

The next in the list of Top 10 Best Sports Movies Ever Made is the Pixar animated movie about racing cars. Lightning McQueen, the star car is in trouble when he is stranded in a run-down desert town, Radiator Springs, before the tie-breaking match for the Piston Cup Championship. The pompous, arrogant McQueen is given Community Service and soon becomes friends with other cars. Although McQueen manages to eventually race for the Champions title, he is unable to win as he helps a rival car when he is pushed off-track by another, McQueen earns respect for his sportsmanship. He then announces retirement and decides to help put Radiator Springs back on the map.

We all know how great a boxer Muhammad Ali was and how the entire world knows his name. The movie Ali  is based on his life, played by Will Smith, who received an Academy Award for the same, and claims the sixth position of the 10 Best Sports Movies Ever Made. We see how Ali wins the heavyweight title and goes on later to convert to Islam. His journey is depicted in the backdrop of all the political and social conditions of the time, and it definitely a must watch if you want to delve into the life of this legend!

This sports movie is one of Bollywood’s finest, with our favourite Shahrukh Khan as an Indian Hockey player Kabir Khan who is outcast by the society when he is alleged to have “thrown” the match to Pakistan after he misses a penalty, causing India to lose. He trains and coaches a team of girls seven yrs later. The girls overcome numerous obstacles, both as individuals and as a team and go on to become World Cup Champions, earning respect for themselves and their coach, who returns to his ancestral  home with his mother, where he is no longer prejudiced against. The struggle of the team and SRK’s amazing acting, makes this a must mention in the list of Top 10 Best Sports Movies Ever Made.

This movie, based on the life of Indian athlete Milkha Singh, earns a rightful place in the list of Top 10 Best Sports Movies Ever Made. The starting scene is that of the Rome Summer Olympics with a coach shouting “Bhaag Milkha, Bhaag” causing Milkha, played by our very own Farhan Akhtar to look back and immediately have a flashback of his gruesome childhood during the Partition of India in 1974. The movie shows how the boy thief survives and goes on to break the world record of the 400m race and have a national holiday named after him. The brilliant acting and superb depiction of the life of “the Flying Sikh” makes this movie a must watch.

The movie stars Kuno Becker as a skilled footballer, Santiago Muñez. Santiago dreams of playing football professionally but feels that his chances are slim due to poverty and circumstances. He is soon noticed by Glen Foy, a former Newcastle United player. Santiago’s father believes his son’s dreams are useless but his grandmother helps. His condition of asthma gets him into trouble but eventually he wins a penalty as a substitute on the Newcastle team, thereby winning the match and leaving his father proud as he watches his son on TV. The aspiring footballer scores the winning goal to earn Newcastle a place in the next season of the UEFA Champions League and movie ends with him in tears of joy at finally living his dream.

The movie is set in late 1975 and has Sylvester Stallone starring as a hard-working local boxer, Rocky. Rocky works as an enforcer for a loan shark. The World Heavyweight Champion, Apollo Creed holds a match and challenges Rocky when his scheduled opponent in unable to compete. Rocky agreed and trains hard for the match. Climactic match starts on New Year’s Day and sees all 15 rounds played and ends with the boxers locked arm-in-arm promising that there will be no rematch. Creed is declared the winner by virtue of a split decision. But Rocky has eyes for nobody but Adrian and the two embrace and profess their love. The boxing match was “the greatest exhibition of guts and stamina in the history of the ring” and their romance was heart-breakingly emotional. This movie rightly claims second place in the list of the Top 10 Best Sports Movies Ever Made.

Love Basketball? Also, can’t get enough of the Looney Tunes? Well, put them together and you have the legendary sports comedy. Space Jam clenching the first spot of the Top 10 Best Sports Movies Ever Made. The movie starts with basketball star Michael Jordan announcing his retirement from basketball to pursue Baseball, his late father’s career. However, he soon proves to be as bad at his new sport as he was good at Basketball. Meanwhile, in outer space, the owner of the intergalactic amusement park sends his Nerdlucks to capture the Looney Tunes as new entertainment. The Looney Tunes challenge them to a game of Basketball and in order to win. The Nerdlucks steal the talents of basketball players Charles Barkley, Shawn Bradley, Patrick Ewing, Larry Johnson, and Muggsy Bogues.