Top 11 Best fielders in Cricket world playing at the moment

By best fielders we did not mean only the good grabbers of the ball but the players with super-human ground fielding as well. Though there will be plenty of them as well. Because modern day cricket has not much to offer to the soppy handers. And why should it be when the games are being decided on a single run. Best fielders in the world not just prove vital for team but also gather huge respect from cricket fans. Cricket is no more a restricted game. One of the most popular sport in the world has millions of its fans all around the globe. The involvement of so much of the glamour and media has exposed it to every single personal out there. Thus compelling the players to perform better in each aspect to earn a good repute.

Today’s cricketers are the most athletic ones. In fact the stunts they perform while on fielding duties were unimaginable a few years back. Modern day batsmen think twice before going for a six over the head of a fielder. These super charged fielders make a considerable difference in targets courtesy their superb fielding efforts. Also the number of impossible catches they grab make their raise their winning chances a thousand folds. At the moment there are so many fielders in the world rightly deserving a place into best cricket fielder list. As a matter of fact, even a single side alone devours more than a half dozen brilliant fielders. However to be more specific we have picked up some of the renowned ball collectors having the universal reputation of best cricket fielders. 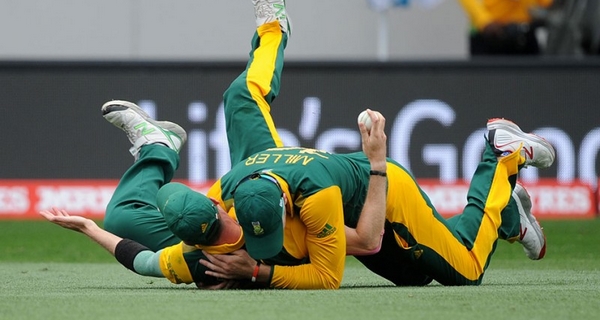 The only genuine fast bowler with a claim to be one of the best fielders is Dale Steyn. The Protea power house is one of the fastest cricket bowlers at the moment. Although his gleam in limited overs game is fading, the sparkle in test cricket is still sunshiny. Unlike most other pacers, Dale Steyn is a brilliant cricket fielder as well. The athletic build he possesses helps him grab some amazing flyers as well as his strong arm assists in bullet-like throws. 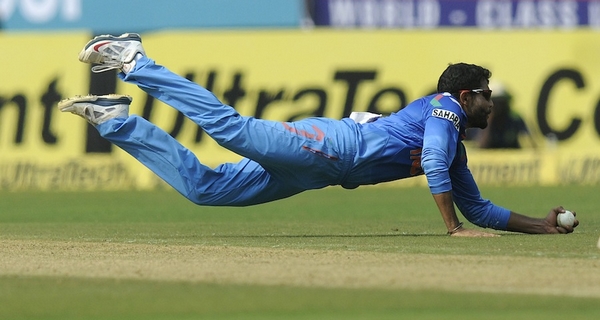 The Indian late order batsman and left arm orthodox bowler is not a complete trustworthy package. However when it comes to fielding, you can bet all your money on him. Ravindra Jadeja’s bowling has been more consistent as compared to his batting lately. Although he is equally loaded with some hard hitting batting talent but lacks consistency. His brilliant fielding skills plus handy bowling option easily cover what is left in the batting. 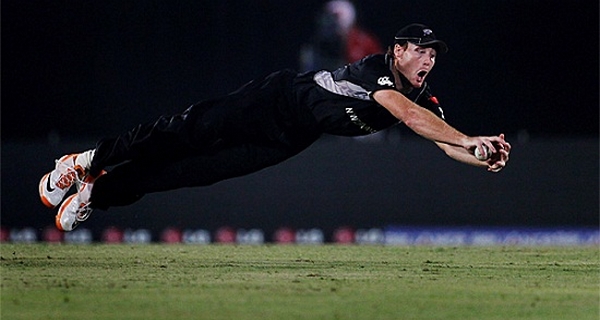 Martin Guptill can be taken as a perfect example of courage and determination. An inspirational ale of a man who wanted to pursue a career in sports but unfortunately lost half of his foot in an accident. The New Zealand opening batsman is one of the most aggressive batsman in the world. In fact he is not any ordinary aggressive batsman he is one of the most courageous man as well. Even after losing three of his toes in accident, Guptill rose up to become the quickest fielder in the world. His batting is exemplary and his fielding is worth applause. But above all his determination is phenomenal. 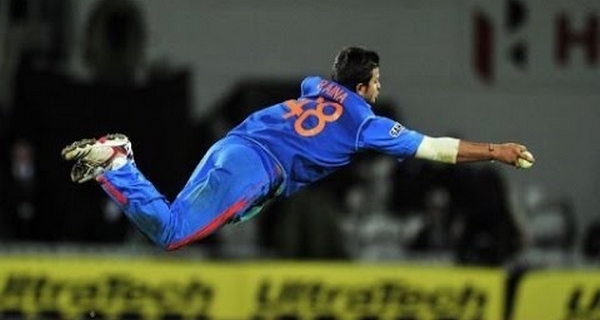 The young Indian talent is one of the best limited overs cricketers. A reliable middle order batsman who is equally useful with his bowling ability, Suresh Raina is a complete package. Indian cricket team is a side rich in talent and finding a permanent spot in it is not easy. However Suresh Raina has been doing the job consistently for quite a time now. One of the best fielders especially has huge reputation of being the best catcher of the ball. Not contented with his fielding, bowling and batting, Raina has emerged as a good captain as well after the latest edition of IPL. 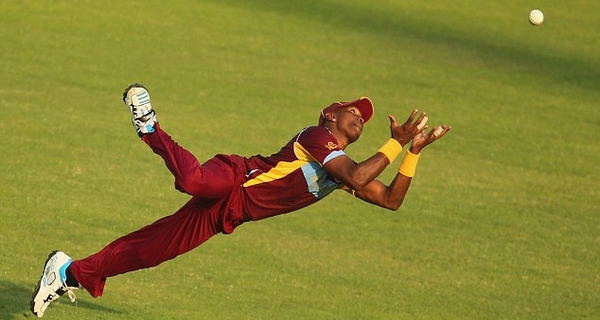 West Indians are born athletes, and the fact give them huge advantage while on the ground. In fact whole West Indian team is consisted of the players capable of any role. A side with only all-rounders in it suits perfectly the fastest format of sport. And two glittering world cup trophies are a real proof of it. Choosing one of the best fielders among the Caribbean players is not an easy job. Still Dewayne Bravo and Andre Russel have something more electrifying over the rest. 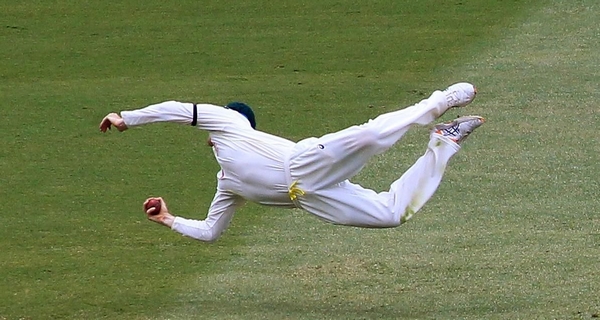 One of the few cricket players who made their way into international cricket through their brilliant fielding abilities. That’s what I believe at least in case of Steve Smith. Though he came in Aussie side as a slow arm bowlers but believe me at that time Australia never needed a bowler. The evolution this player has gone through is really rare. The current Australian captain Steve Smith has learned really sharp evolving from a mere fielder to become the backbone of his side. Fielding off course was his strength even from the beginning. 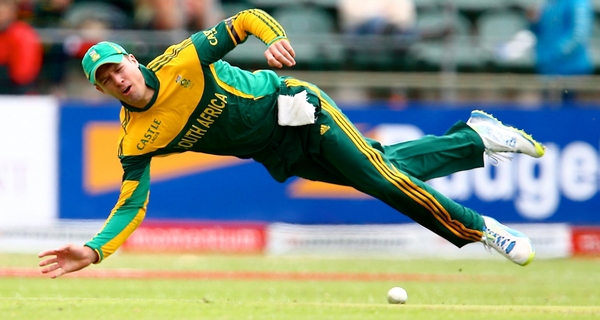 This man needs no introduction, neither for his batting nor for his attitude on the field. One of the most loved cricketer in the world AB de Villiers is a personification of perfection. The man that gave batting a new meaning through his unconventional and improvisational innovative shots Ab de Villiers is yet a brilliant fielder as well. One of the best wicketkeeper in South African sack, de Villiers has been relieved of keeping wickets by Quinton De Kock. And that has made fans much happier. Well, who does not want to see the most of Abraham ‘super’ De Villiers? 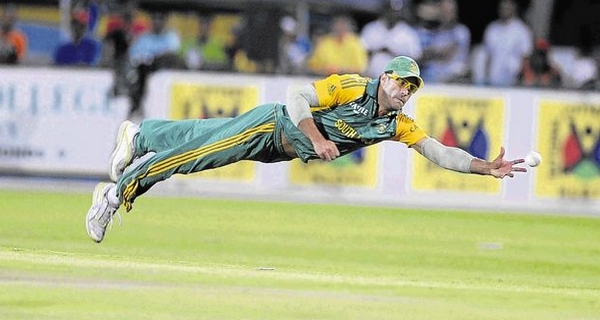 Faf du Plessis is yet another Protea player enriched with the talent and skill. One of the few players who held the record of not getting done of a duck for a long time, Faf du Plessis is a pure fielding beast. Athleticism as it appears form his perfectly toned physique, Faf du Plessis is one of the best cricket fielders. His catching ability as well as ground fielding and stump-aiming agility declare him the quickest hands in cricket. 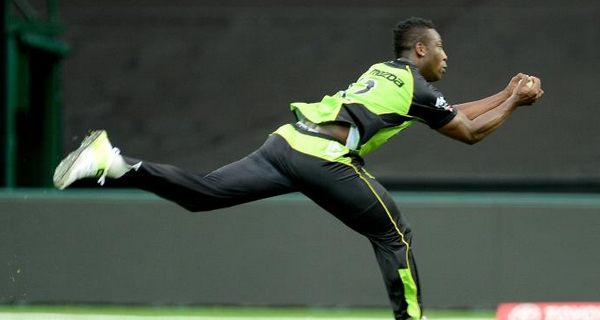 Yet another West Indian in best fielders list with no less talent than DJ Bravo. In fact Bravo has been out of his touch lately, but not Andre Russel. A pure hard hitter batsmen who recently has been given the charge of bowling as well. Though he was a handy bowler from the start, the regularity has just came. As for the fielding skills, he is a real superman. Bold, fearless and athletic, all together in his batting, bowling and fielding. 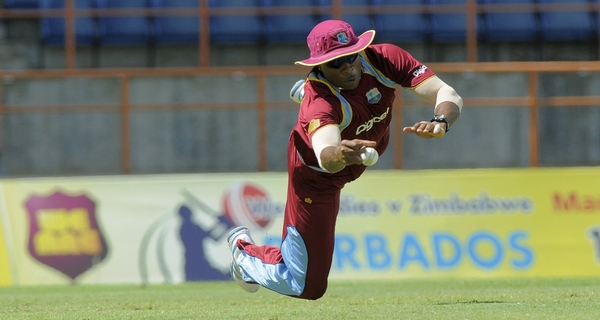 The mighty West Indian is one of the giants of cricket for his tall build. A perfect limited over hitter who occasionally bowls as well, Kieron Pollard is a great fielder. Not just his height but also his big hands help him grab cricket ball easily. Kieron Pollard often fields at long boundaries making it impossible for the batsmen to hit any near over his head. 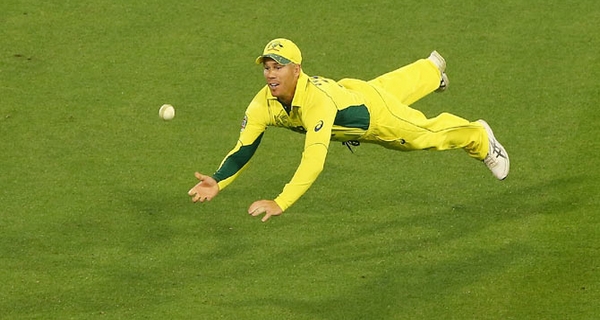 Warner is one of the  in the world right now with an ability to accelerate any time. His batting ability has no doubts as he has been proving in recent years. In fact at one end he has been standing all alone while on the other Australia have tried many openers the likes of Finch, Watson and more recently Usman Khawaja. A perfect batting sensation who has proved his worth in leadership experiment as well, Warner is one of the safest hands in cricket world. One of the best fielders in the world has very strong arms. Thus his powerful throws make it very tough for the batsmen to steal a run from him.