We all know what a precious little thing Ronaldo jr. is. And there is absolutely no doubt that Cristiano Ronaldo and his son make the most adorable father-son duo of soccer. And, the boy has already become a star, not just because of his famous father, but also because he is a total cutie-pie, and the people on the internet could just eat him up! Whatever he does goes viral. And, here’s another one as Ronaldo’s son dressed as Superman interrupts interview!

In this video, Ronaldo is busy in an interview when his son returns from school! He then prances in front of the camera, dressed in a Superman costume, and looking supercute. He then behaves totally adorable, as he shies away from the camera and the interviewer, and hides his face in his father’s chest, as the father and the son hug. The little being is just so irresistible! 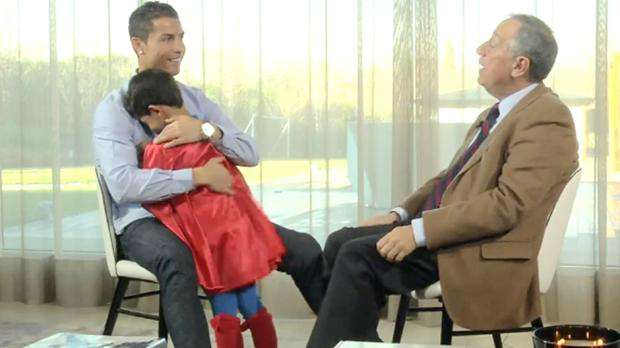 Amidst the cuteness overload of Ronaldo jr., you might just miss one thing, which you totally shouldn’t – The love of Ronaldo for his son. We all know that off the field and the glitz and glamor, Ronaldo is a doting father who spends as much time and energy as possible to be a part of his son’s life. From helping his kid with homework to clicking quirky pictures with him, Ronaldo’s love for the 6-year old is known to all. And in this video, too, it is quite clear.

As he looks at his son and watches junior’s activities, his adoration and pride for his little boy is quite visible in his eyes, his smile and the way he interacts with his son. Take a look this cute video, and we can assure you that you will go all “AWWW!” after watching it!